Turnkey solutions for your business
Home
About URALCHEM
Executive team 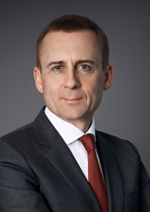 Rinat R. Gizatulin
Deputy CEO - Director of Government Relations of URALCHEM JSC
Mr.Gizatulin was born on July 28, 1980. He graduated from Perm State University with a degree in Political Science. Candidate of Historical Sciences. In 2002-2003, the Editor-in-Chief of CJSC Kommersant in Perm. In 2004-2008, he worked in the Russian Ministry of Natural Resources where Rinat headed the Department of Public and Media Relations and Coordination of Exhibition Activities, after which was appointed Deputy Director of the Department of Administration, Civil Service and Human Resources. In 2008-2011, he was the Director of the Department of State Policy and Regulation in the Field of Environmental Protection and Ecological Safety as part of the Ministry of Natural Resources and Environment of the Russian Federation. In 2011-2015, Rinat served as the Deputy Minister of Natural Resources and Environment of the Russian Federation. In 2016-2017, he acted as the Vice President of ALROSA (PJSC). Since 2017, he has been Deputy CEO of URALCHEM JSC. Active State Advisor of the Russian Federation (Class 1).

Mr.Bulantsev was born on July 9, 1969. He graduated from Bauman Moscow State Technical University, the Department of Special Mechanical Engineering, Automatic Control Systems. In 2000, Igor graduated from Finance Academy affiliated to the Government of the Russian Federation with a degree in Banking and Finance. In 2006, he received an MBA degree from IESE Business School (University of Navarra), Spain. From 1995 to 1998, he worked at Russian Credit Bank as the Head of the Foreign Exchange Operations Department. In 1998-2003, Igor served as Senior Vice President of Guta Bank. In 2003-2009, he occupied the position of the First Deputy Chairman of the Board of OrgresBank (renamed to Nordea Bank in 2009). From 2009 to 2016, he was Chairman of the Board of Nordea Bank. From 2016 to 2018, Igor served as Senior Vice President of Sberbank, Head of Sberbank CIB (Sberbank's corporate investment business). Since 2019, he has been Deputy CEO – Chief Financial Officer of URALCHEM JSC.

Mikhail V. Genkin
Deputy CEO - Director of Strategy of URALCHEM JSC
Mr.Genkin was born on June 2, 1967. Graduate of Gorkiy State University (Radiophysics and Cybernetics department). From the middle 1990s he held the top management positions in large chemical companies: National Gas Company and AK SIBUR. Since 2007, Mikhail Genkin is Business Development Director of URALCHEM. In 2007 Mikhail Genkin is elected to the Board of Directors of URALCHEM. Mr.Momtsemlidze was born on December 1, 1968. He is a graduate of Perm State Technical University (Industrial Economics and Management) and the Academy of National Economy under the Government of the Russian Federation (MBA). From 1993 to 2006, Mr Momtsemlidze held executive positions with Uralkali and its affiliated organisations. In 2007, he was appointed the Director of LLC Transportation and Logistics Company of the Kirovo-Chepetsk Chemical Plant. In 2008, he was appointed the Director of LLC URALCHEM-TRANS. From 2011 to 2018, he acted as the Director of the KCCW Branch of URALCHEM, OJSC. From 2018 to 2020 - CEO of URALCHEM JSC. He is a member of the Legislative Assembly of the Kirov region of the V, VI convocations (since 2011). Since 2021 - Nitrogen Production Director of URALCHEM JSC. Aleksandra S. Glazkova was born on June 27, 1987. Aleksandra graduated from St. Petersburg State University of Economics. Master of International Business Administration, University of Hamburg. Graduate of the Presidential Management Training Program "Management in Health Care". PhD in Economics. Member of the Coordinating Council for Youth Affairs in the Sphere of Science and Education under the Presidential Council for Science and Education, Russian Federation. Her professional career began in international companies Red Bull, BMW, Johnson Controls Automotive. From 2011 to 2021, she had been working at the international biotechnology company BIOCAD, where she served as Vice President for HR and Corporate Marketing since 2014. In March 2021, she was appointed Human Resources and Organizational Development Director at URALCHEM, JSC. Yury P. Voronin
General Director of URALCHEM Trading house
Mr.Voronin was born on July 12, 1971. He graduated from the Peoples' Friendship University of Russia with a degree in ‘Search for and Exploration of Oil and Gas Fields’, as well as from the Plekhanov Russian Academy of Economics (MBA course). In 2003-2004, he headed the Marketing Department of Exxon Mobil Petroleum & Chemical. In 2004-2005, Mr Voronin was the head of the Lubricant Oils Directorate in Yukos RM. From 2005 to 2009, he held the position of Director of Marketing and Sales with TNK Lubricants/TNK-BP. In 2009-2012, he served as the General Director of TNK-BP’s subsidiary in the Republic of Belarus (TNK-BP West). From 2013 to 2017, Mr Voronin worked for BP/Castrol, where he undertook the responsibilities of the Director of Oil Sales in the B2B segment. Since 2017, he has been the General Director of URALCHEM Trading House.

Mr.Kovshov was born on April 4, 1977. He graduated from the Moscow State Railway Engineering University, specializing in “Commercial Activities in the Market of Railway Transportation Services”. From 1998-1999, he held the position of Deputy Manager of the Transportation Department with the SUAL Company. From 1999–2007, he held positions as Head of the Commercial Department, Head of the Railway Transportation Department, Deputy Director General, and Director General with the SUAL-Transport Company. From 2008-2011, he worked as a Deputy Director for the freights forwarding organization of the URALCHEM-TRANS Company. In July 2011, he was appointed to the position of Director with the URALCHEM-TRANS Company.