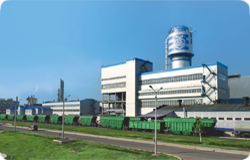 PMU Branch of Uralchem JSC in Perm is one of the largest producers of nitrogen fertilisers in the Urals and Western Siberia.